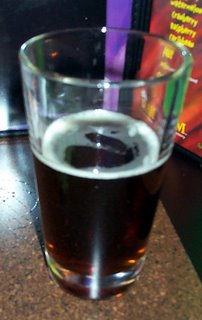 Some Root Beers exceed expectations and some aspire to be something they aren't, while others just never really manage to figure out what they want to be and embrace mediocrity as their norm. The latter description applies to the Root Beer brewed by the Ram Restaurant and Brewery in Fishers, Indiana and, unfortunately to the food, as well.

This past weekend my family and I managed to make it into The Ram after a previous attempt failed due to the large, early crowds. One of the main reasons I wanted to check the place out was their Big Horn "Soda" Root Beer and my wife wanted to see if their beer was any good...she's a Chemist who home brews, plus it was Friday night and the Man In Brown doesn't cook on Fridays. I almost wish I had stayed home and called out for pizza. It would have been a lot cheaper.

We didn't have to wait for a seat and the service was fairly good. During the ordering process I mentioned that I wanted a Root Beer and was informed that it was flat. That was a shame, since it was the real reason I bothered to show up. When I asked if they had any which was bottled, (as they advertise on their website) I was told they fill growlers...but, the Root Beer was flat and they were waiting for more. "No bottles?" Nope. But maybe they had tapped another keg of Root Beer that wasn't flat.

You can see where this is going? I have never had to work so hard to get a Root Beer at any place I've been to. It was like pulling teeth. Finally, it showed it up with my meal...in a non-frosted glass. Grrrrr...a minor enough faux pas on their part, entirely forgivable in most circumstances, except my wife got one with her beer...a beer she had to ask for twice.

So, I'm finally drinking my Big Horn "Soda" Root Beer and paying attention to it and....I'm not impressed. It had a nice aroma, a nice head, biting carbonation, slight sweetness, unremarkable flavour and no real body. It was...OK. Not bad, not great, it was just OK. Much like the food. Mediocre.

I ordered what was purported to be a "Kobe" Wagyu Beef Burger, a premium imported Japanese beef. One would think you would let a premium ingredient speak for itself and use nothing to detract from it. Nope. Not at The Ram. The burger, (cooked to perfection at medium rare) was slathered in an overly sweet and cloying "bourbon glaze". Even scraping it off didn't rid the meat of the taste of this artificial tasting glaze. Why anyone would ever think to cover a premium meat with something that covered the taste, rather than enhancing the flavour is beyond me. The rest of the family had Fish and Chips and Mini-Corn Dogs. It was exactly what you could have expected, more mediocre fare.

Am I sorry I went to The Ram? Nope. If I hadn't gone I would not have been exposed to their bill of fare and wouldn't know what to expect if I were to return. Now, I know. I probably won't be going back, since there are so many other places in my area which I have either not tried or are on my good food list. Despite a professional and open kitchen The Ram failed to deliver when the chips were down.

PS: My wife? She brews better beer. While I'm not a drinker, I am a taster and hers has better attributes than theirs.

Carbonation: A fine bubble with a biting edge to it. Nice.

Sweetness: Lightly sweet, the sugar came out when the Root Beer warmed up.

Head: A nice head. Ringed the glass for quite awhile.

Overall Taste: Not bad, not great. Mediocre. You can get better mass produced Root Beer in a bottle.

After my last experience with Goose Island Root Beer I needed something to wash that taste out of my mouth and memory. Looking at the Root Beers in my fridge I decided to pull out one I knew to be a winner in the taste category and get my taste buds back in the game.
The choice was clear to me. I reached in and grabbed a Capt'n Eli's Root Beer. Not too many Root Beers out there come with their own online comic book, as comics go it's pretty darned good, reminds me a lot of all those Johnny Quest cartoons I consumed as a kid. They also have a nice interactive website and online store to order their fine products.

Capt'n Eli's Root Beer is made by Shipyard Brewing in Portland, Maine and these guys know what they're doing. From the amber bottle to the great label artwork and the brew itself, the folks at Shipyard have managed to craft a Root Beer that has all of the right qualities, in the right amounts and it stands out from the rest of the market. They could easily have called this Admir'l Eli's and they'd have been right on. From the head and the spicy Root Beer flavour to the just right sweetness, this is a true, premium brew. Capt'n, my hat's off to you.

Let's get down to the review, although I feel it just cannot do it justice, you'll have to get up and go find one and drink it, to truly understand this Root Beer. If I could get Capt'n Eli's locally in the Indianapolis area it would become a staple in my fridge.

Carbonation: Nicely carbonated. It adds an enhancing kick to the spiciness. Too few brews manage this.
Mouth Feel: Not creamy, but not too thin.
Root Beer Flavour: A spicy flavour with a nice undertone of cane sugar sweetness.
Sweetness: Medium sweet not cloying in the least. Just right.
Head: Reasonable, medium length.
Aftertaste: Spicy with a slight vanilla tone that meshes well with the cane sugar taste.
Aroma: Sharp, spicy with a cane scent.
Overall Taste: Beautifully spicy with an understated hint of wintergreen . The anise combines really well with the wintergreen and the brew just makes your tastebuds sing.

The Politics Of Root Beer

Politics and Root Beer mix fairly well in my estimation. Root Beer came to national prominence during prohibition, the largest single statist example of social engineering by government we've experienced other than the Income Tax. So it was only fitting that the Root Beer Man himself do a poltical good deed.

I had an invitation to attend a meeting today for Mr. Mike Kole, a fine gentleman hoping to win the Libertarian Party of Indiana's nomination to run for Secretary of State of Indiana, and it was an invitation I was more than happy to accept. You see, Mr. Kole has a not so dark secret. He's a Rootie. That's right. The man likes a good Root Beer. 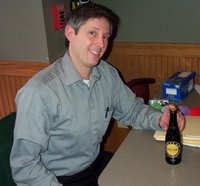 So, the Man in Brown took himself to a political meeting and brought along a little something to help christen Mr. Koles campaign. Mr. Kole's meeting was held at Claude and Annie's in Fishers, Indiana and the good folks there were happy to provide me with an frosty glass full of Mug Root Beer, compliments of the Kole campaign.

After all the hoopla and speechifying was done I pulled Mr. Kole aside and presented him with a not so rare vintage bottle of Boylan Bottleworks Root Beer. He was suitably impressed by the embossed bottle, as am I. Fortunately, none of the pictures with me in them were of sufficient quality to include here but Mike's picture is worth noting. He regaled me with his road trip tale from the Portland area and his introduction to Henry Weinhard's. If you're a resident of Indiana do yourself a favour and give Mr. Kole the nod on Election Day. He's certainly got my vote!
Posted by Michael Jarrell at 10:42 PM No comments:

Every so often I'll be somewhere by random chance and run into something nifty. That was just the case recently when I walked into a local Aldi's store. I have been in one of these places exactly twice now. After this experience, I may not go back again. I had dropped in to take a look and see what they had. Nothing really, other than 6-packs of Goose Island Root Beer for $2.99. Not a bad deal but I can see where they got the pricing on this. I might have got the worst of the deal.

Goose Island is a Chicago "Handcrafted" brew that says it is "Creamy Head Root Beer". The head isn't too bad, many others posses less longevity than this one. The Chicago part should have been my warning, tho. Not being a huge fan of Chicago I often seem to get things labelled "Chicago" that aren't very good. Perhaps it is the curse of Capone, who knows? This Root Beer certainly falls into that category. Other than the sugar taste Goose Island doesn't have a lot to recommend it. There just isn't a lot of flavour going on here beyond sugar. The scent is pleasant enough with subtle hints of licorice, wintergreen and light vanilla, the mouth feel is only slightly heavier than a Soda and the aftertaste is sugary, tho not unpleasant. Oddly enough the flavour in this Root Beer develops after it has warmed up to room temperature. Unfortunately, I dislike warm Root Beer.

Mouth Feel: Not too much thicker than a soda

Root Beer Flavour: Old Time flavour when you can find it. Not a lot, tho.

Head: Longer lasting than many.

Aftertaste: Sugar with a mild hint of vanilla

Aroma: Hints of wintergreen and anise or licorice. Mild vanilla.